Back around the holidays I got a chance to check out the first iteration of this type of device with the Ultra Dual USB Drive. The design wasn’t bad but had some things that I wasn’t a fan of. One the coloring and how small and light it was caused multiple times I would lose or misplace it. Second product was that the microUSB dongle was pretty short and you if using a case you 9x out of 10 have to remove it. Sandisk has heard these complaints and released its successor with a 3.0 titled model. It comes with a redesign and also USB 3.0 capability. With all this said is it worth upgrading? 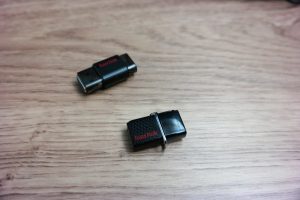 Like its predecessor it has two ports with a microUSB connection on one side and a USB 3.0 connection on the other. The microUSB connection is much longer then the one from the 2.0 model and now I don’t have to remove my cases which was heavily annoying. The overall design is much cleaner with a single latch which you can pull in either direction to reveal a port you need access to. They also added a large loop ring to attach the Drive to say a pair of keys or whatever else you desire. This can aid in you not losing the darn thing and the other one was way too small. While I did like the design at 1st on the 2.0 Drive better, this one is more clean and results are a greater deal.

The SanDisk Ultra Dual USB Drive 3.0 comes in three storage sizes which are 16GB, 32GB, and 64GB. There is an Sandisk Memory App that you can use to organize your files and see how much memory you have left. But it’s not necessary and you can always stick to whatever file manager you been using to achieve similar if not greater results. I have been using the 32GB model. 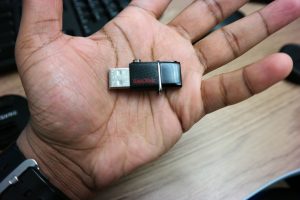 I tested out device compatibility with quite an array of smartphones like I did last time and achieved positive results. Smartphones tested were the Samsung Galaxy S6, HTC One M9 and Samsung Galaxy Note 4. All are on their compatibility list website and are working great. Once you plug the Drive into your desired smartphone depending on the model it will usually pull up a file manager. There you can gain access to your folders and move and transfer with ease. I had roughly 5GB on the Galaxy S6 and was able to move it over in no time. Grabbing movies off my laptop didn’t take long thanks to the USB 3.0 connection.

Like the model before it, the SanDisk Ultra Dual USB Drive 3.0 is a great companion for your Android smartphone. It helps transfers data quickly and eliminates the need to look for USB cables. This drive is also a good addition to the Samsung Galaxy S6 as it has no expansion option for memory and could help you save money if you don’t want to buy a smartphone with larger memory built-in.